What is an explosion?

An explosion is any uncontrolled combustion wave. In order to create an explosion the has to be fuel (for example an explosive gas such as hydrogen), and oxidizer (such as the oxygen in air) and a source of ignition energy (for example, a hot surface or an electrical spark). These three items are commonly referred to as ‘the fire triangle’. In addition to this, two additional facets are required; something to mix the fuel and the oxidizer (such as the turbulence created in a gas leak under pressure) and containment. It is however common industrial practice to use the term ‘explosion’ for both confined and unconfined combustion.

For any mixture of a combustible gas or vapour with an oxidizer there is a critical ignition energy. If one releases less than that critical amount of energy into the mixture, there will not be a self-propagating explosion. Some combustion may occur transi­ently, but the combustion wave will not grow and become self-­propagating. If one releases at least the critical amount of energy, the combustion wave will pass through the incipient stages of growth and become self-propagating as a plane wave, resulting in an explosion. 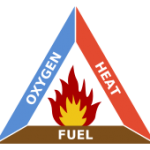 At a critical concentration called the most easily ignited concentration (MEIC), the amount of energy required to cause ignition is minimal. If the ignition experiment is conducted under conditions that allow one to assume that all the energy injected into the gas/vapour cloud is utilized in the combustion process, the critical energy at the MEIC is called minimum igni­tion energy (MIE). As the concentration is varied from the most easily ignited con­centration the amount of energy required to cause ignition in­creases, approaching asymptotically at lower concentration, the lower explosive limit, LEL (often called lower flammable limit), and at higher concentration, the upper explosive limit, UEL (often called the upper flammable limit).

The LEL and UEL are not inherent properties of an explosive atmospheres  . Their values depend on the nature of the experiment by which they are determined, especially the size of the vessel and the energy available from the ignition source. No prudent person controlling concentration to reduce the risk of an explosion would operate much higher than 50% of the LEL except under very carefully controlled conditions. In most situations the limit is set at 25% or lower.

Effects of Oxygen Enhancement, Temperature, and Pressure on Explosive Atmospheres

Oxygen enrichment increases the heat release within the com­bustion zone of the developing wave-front and therefore decreases the required initial energy contribution from the ignition source. The most easily ignited concentration of oxygen and vapours or gases ignites at about one hundredth the minimum ignition energy of the most easily ignited concentration of the same vapour or gas in air. Because the flame speeds are considerably higher, the pressure rise in an explosion-proof enclosure may also be much higher. No means of explosion protection considered safe for atmospheric mixtures should be considered safe in oxygen enriched mixtures without careful examination.
The qualitative effect of increasing temperature is relatively easy to estimate. Every material has a spontaneous ignition tempera­ture at which it will ignite spontaneously. Obviously, if the temperature of a mixture is raised, the amount of electrical energy required will decrease, reaching zero at the ignition tempera­ture.

The effect of pressure is understandable if one considers that when pressure increases the number of molecules per unit volume increases. The heat release per unit volume will con­sequently increase, and the ignition energy required to cause the incipient flame sphere to grow to its critical diameter decreases. Similarly, decreasing pressure decreases the amount of energy released in the combustion zone and increases the required elec­trical ignition energy. This relationship has been verified experimentally over many atmospheres of pressure change. Doubling the pressure of a gas cuts the ignition energy to approximately 25% of its former value.

A hazardous area is defined as an area in which explosive atmospheres, or may be expected to be, present in quantities such as to require special precaution for the construction and use of electrical equipment. An explosive atmosphere consists of a mixture of flammable substances with air in the form of GAS, VAPOUR OR MIST in such proportions that it can be exploded by excessive TEMPERATURES, ARCS OR SPARKS.
The gases, vapours or mists will only explode when mixed with air between specific percentage mixtures, these are called:

It is evident from the limited list shown in the table above that there are some natural groupings for the gases based on their MESG and MIC values.  These groups are divided into two groups;

The gas groupings and the temperature codes are reflected in the markings that appear on electrical equipment, which has been certified for use in a hazardous area. The marking of the gas grouping and temperature code on the equipment identifies to the user the type of explosive atmosphere in which it can be safely installed.
Explosive Atmospheres are further divided in zones, these zones relate to the predicted occurrence of when an explosive atmosphere may be present in the area.  These zones are defined as being:

There are eight commonly recognised concepts of protection in Europe and under NEC505 for electrical equipment, there are four under NEC500 (Divisions).

A method of protection where the equipment is contained within an enclosure which will withstand an internal explosion of a flammable gas or vapour that may enter it, without suffering damage and without communicating the internal flame to the external explosive atmosphere, through any joints or structural openings in the enclosure. The enclosure will be designed for a particular gas grouping.

A protection technique based upon the restriction of electrical energy within the apparatus and in the interconnecting wiring, exposed to a explosive atmosphere, to a level below that which can cause ignition by either sparking or heating effects. Because of the method by which intrinsic safety is achieved it is necessary that not only the electrical apparatus exposed to the explosive atmosphere, but also other (associated) electrical apparatus with which it is interconnected, is suitably constructed.

Explosive Atmospheres Protection Concepts – INCREASED SAFETY
Europe and NEC505
A method of protection by which additional measures are applied to an electrical apparatus to give increased security against the possibility of excessive temperatures and of the occurrence of arcs and sparks during the life of the apparatus.  It applies only to an electrical apparatus, no parts of which produce sparks, arcs, or exceeds the limiting temperature of the materials, upon which safety depends, that are used in its construction.

A type of protection applied to an electrical apparatus such that, in normal operation, it is not capable of igniting a surrounding explosive atmosphere, and a fault capable of causing ignition is not likely to occur.

Explosive Atmospheres Protection Concepts – POWDER/SAND FILLING
Europe and NEC505
A method of protection where the enclosure of the electrical apparatus is filled with a mass of granular material such that, if an arc occurs the arc will not be liable to ignite the external explosive atmosphere.

Category 1 Equipment (Zone 0)  Ga, Da
Must not have ignition sources that can become effective even in the event of a rare malfunction. Equipment in this category is intended for use in areas in which explosive atmospheres caused by mixtures of air and gases , vapours or mists or by air/dust mixtures are present continuously for long periods or frequently.

Category 2 Equipment (Zone 1) Gb, Db
May have effective ignition sources (with a malfunction applied) protected by a concept listed in EN113463-1. Equipment in this category is intended for use in areas in which explosive atmospheres caused by gases, vapours, mists or air/dust mixtures are likely to occur.

Category 3 Equipment (Zone 2) Gc, Dc
Must also be protected by a concept when ignition capable (relative to the gas or dust) in normal operation. Equipment in this category is intended for use in areas in which explosive atmospheres caused by gases, vapours, mists or air/dust mixtures are not likely to occur.
The categories in normal practice are equated to the suitability for Zones. Apparatus will be marked with the grouping and category in addition to the marking required by the individual protection.